An Audience with the Dalai Lama:

ME: “I’m calling to ask you to lunch before I leave.”

A GOOD GIRLFRIEND: “Where are you going?”

GF: “Where are you starting?”

ME: “With the Dalai Lama”

Puffy-eyed, achy, I landed in Delhi. I was connecting to Dharamsala. It was all a haze. Into a propellor plane for a short flight, then into a cab. Up we climbed into the impossibly-perched mountainside town of McLeod Ganj. Since his exile from Tibet in 1959, this beautiful place has been home to His Holiness The Dalai Lama. 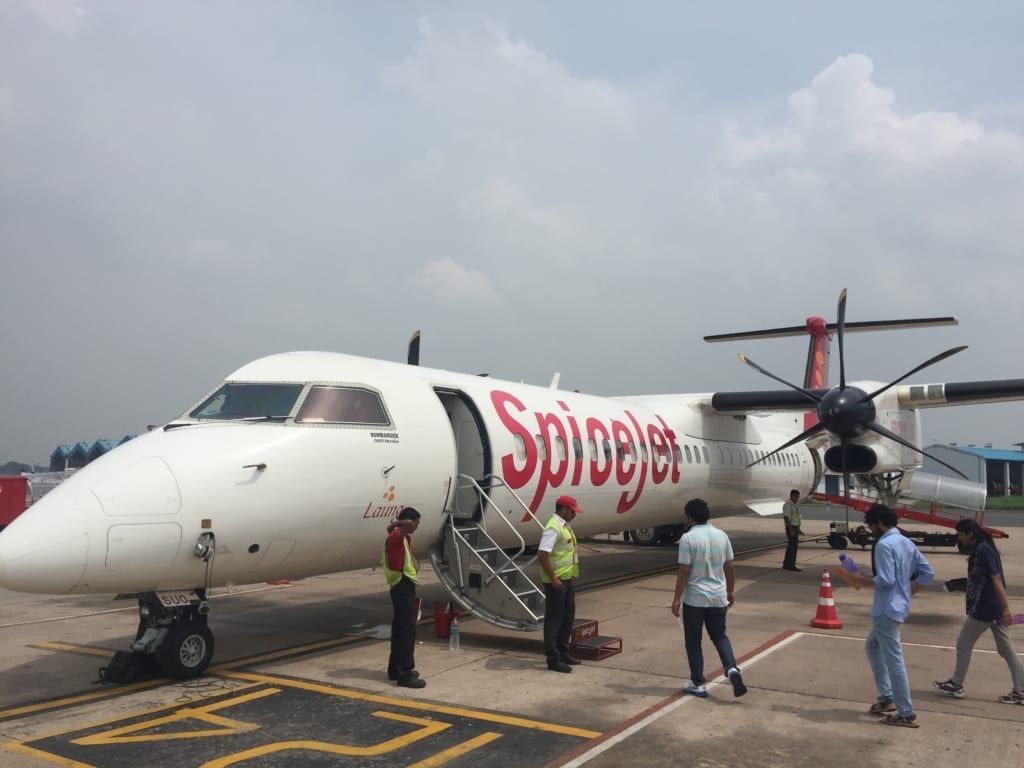 The propellors of Spice Jet, how much did I love flying in that?

Thanks to several google sessions I’d figured out his schedule, and that he would be offering an audience. Upon arrival at his temple, I eagerly queued up for a ticket and security clearance. It cost the equivalent of 10p (that’s around $0.15). I smiled, knowing that in Europe an audience with this incredible man can set you back hundreds of pounds. 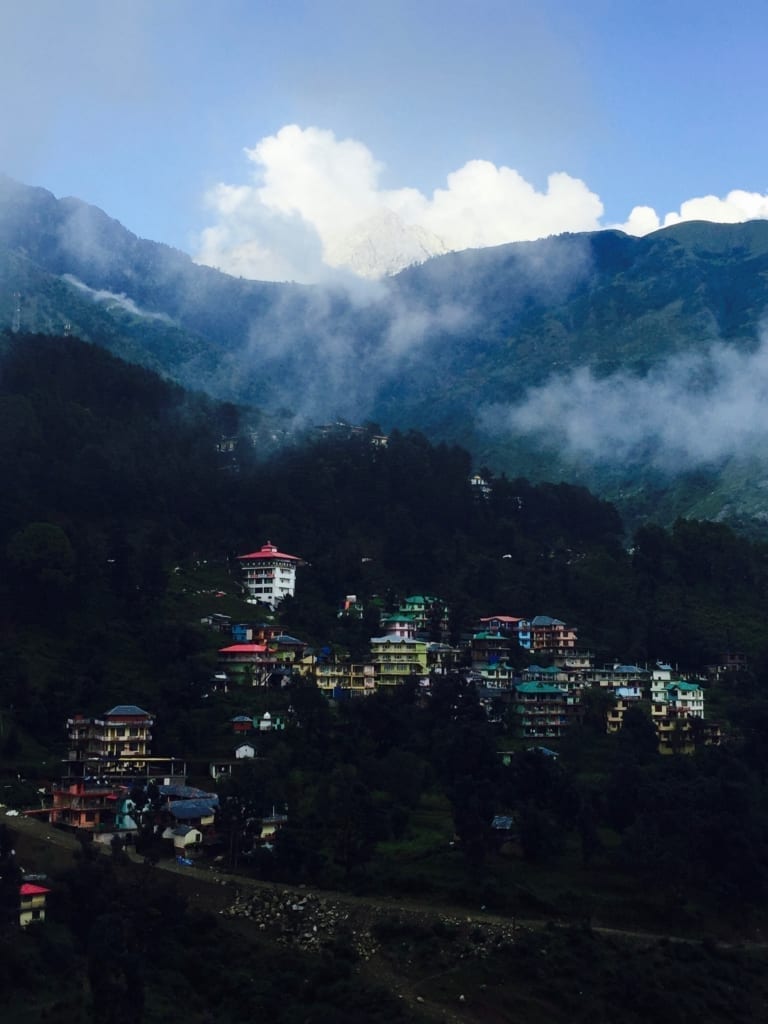 The impossibly perched mountainside home of His Holiness The Dalai Lama, McLeod Ganj

The vibrations were an immediate contrast with London life: The sense of connection was unquestionable.

For the next three days I sat, sardine-style, on a concrete floor, amongst hundreds of dedicated worshipers. I was huddled up with my new friend Sinta and her son Isaiah (pictured). Via handheld radio sets and headphones we listened to the English translation of His Holiness as he gave a tantra initiation. 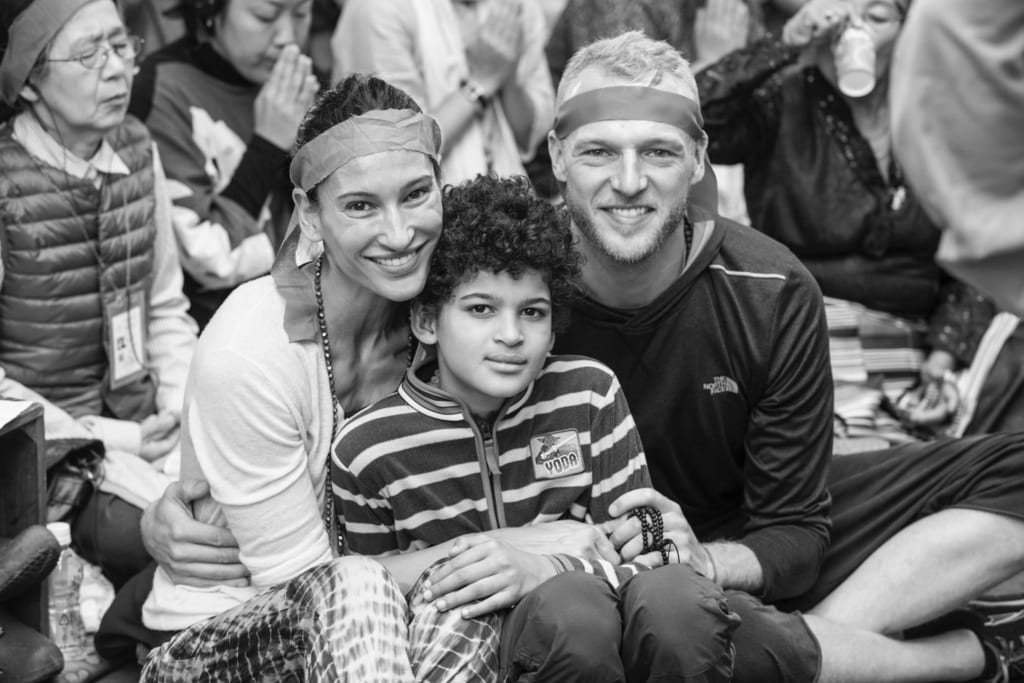 Sinta, Isaiah and I, as sardines, at the Dalai Lama Temple

Banks of translators were perched on low tables, speaking into microphones: They offered interpretations of the precious words He spoke in Japanese, Chinese and so many other languages. They all spoke His words of selflessness, or devotion to all, of connectedness and respect for all sentient beings.

The three powerful days passed very quickly. Exhausted and coming down from the relentlessness of western life, my attention span wasn’t so sharp. Despite this, my memories of that time now still vivid:
The vivid colours of His temple, the coldness of the floor still look and feel so real.

We had fresh morning walks past the many street vendors selling a seemingly endless number of strands of mala beads: They had every texture, shape and colour imaginable. 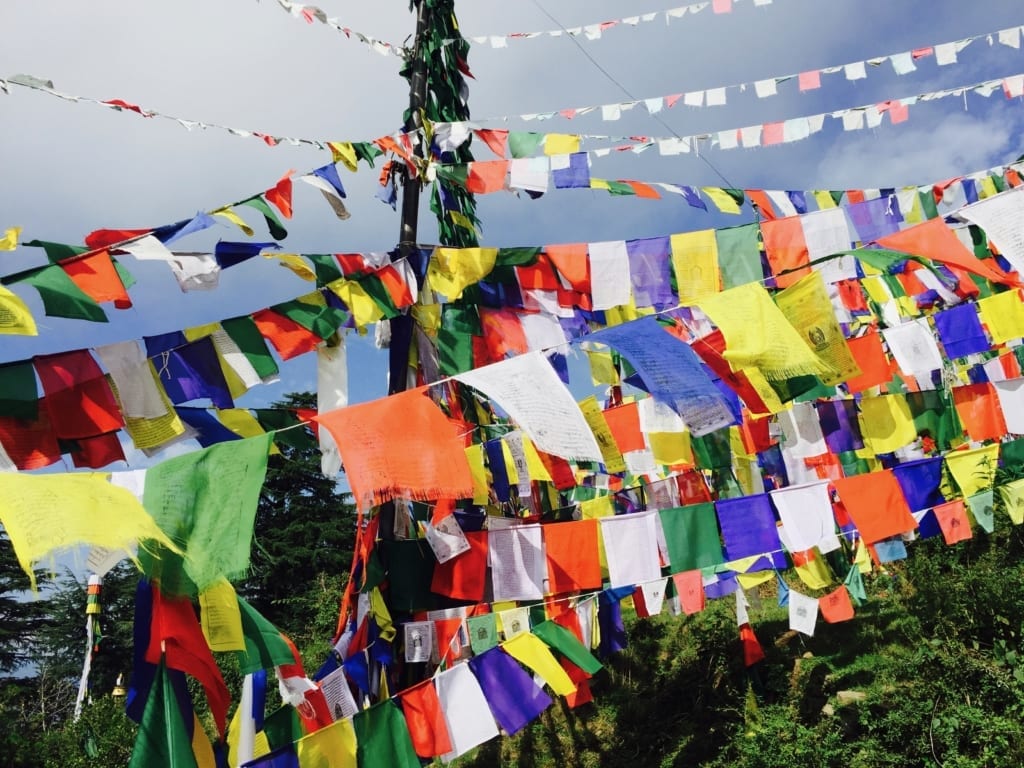 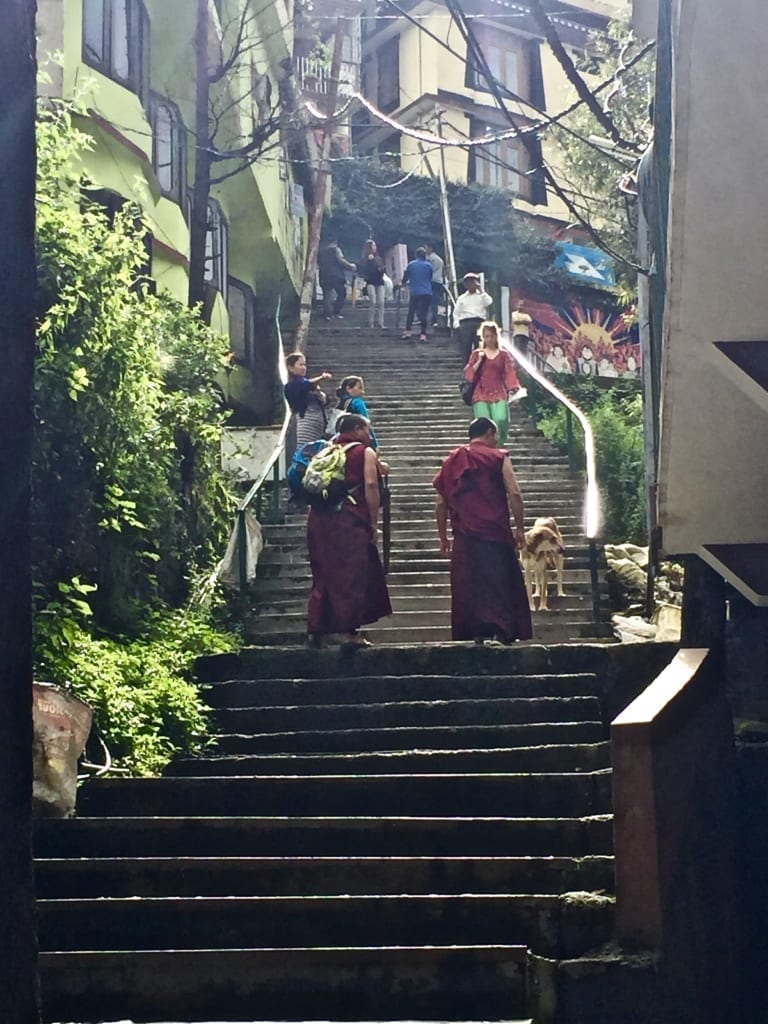 My afternoons were spent in a rooftop bar, reading and hiding from the rain showers. As I ate momos, I looked down on the beautiful Buddhist boys and girls of the monastic school playing during their lunch break. The sounds of their shrieks of laughter are still with me today. 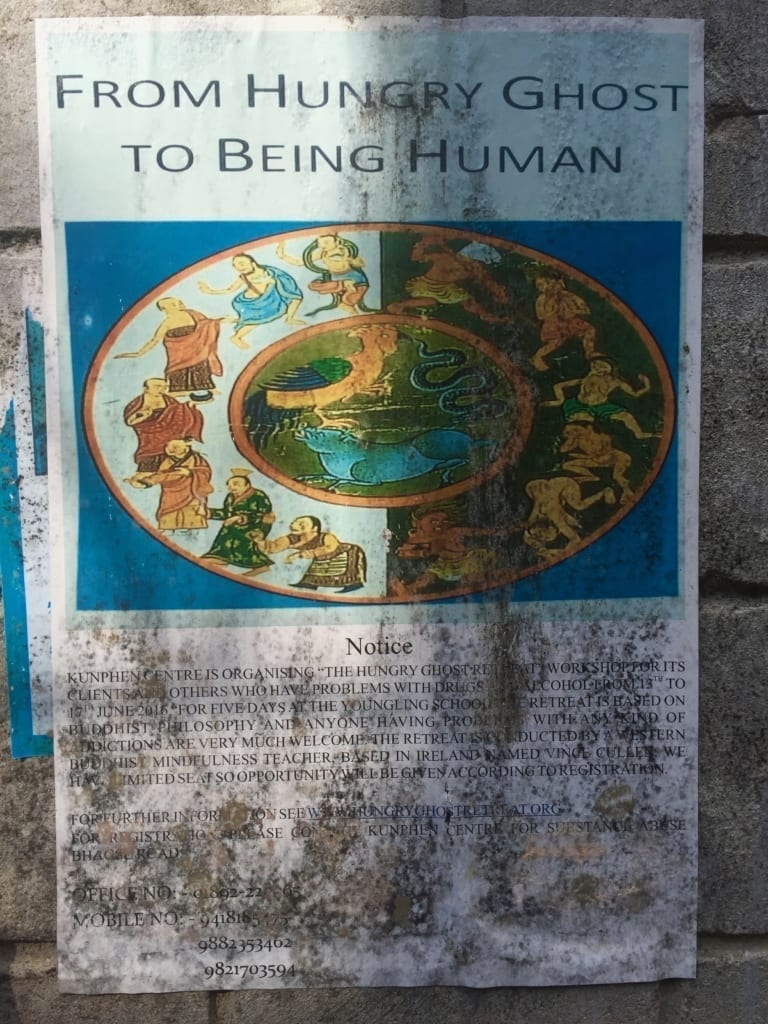 Hungry ghosts, here is your warning…

Perhaps the thing that has remained with me the most was the vibration: Was it the voice of HH, layered with that of the English translator that still gives me chills? Was it this voice, a low and deep vibration, during the initiation he gave, reverberating off the walls, pillars, ceiling and people? Partly, yes. 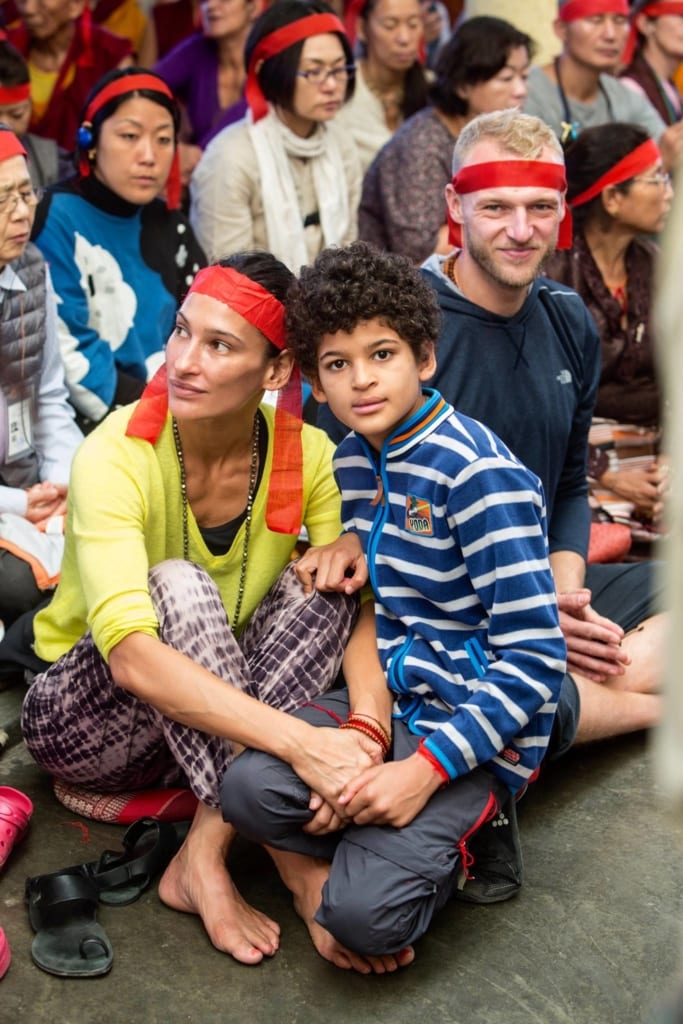 Sinta, Isaiah and I in the mix

This was the first time I acknowledged the importance of how things ‘felt’:
It was time to park the western style approach to processing the world, not try and explain and simply FEEL. I knew I preferred this feeling of being squashed in to that of a tube train in rush hour. 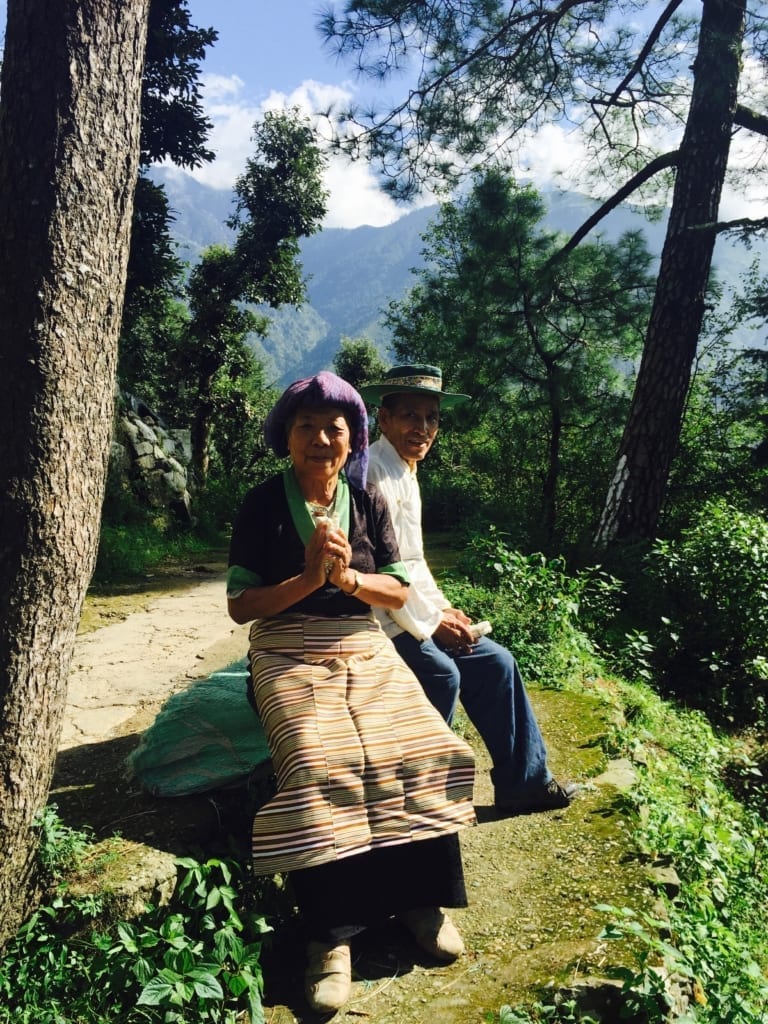 Despite not being able to communicate with the 75 year old Tibetan village woman next to me, I openly felt our connection. In fact I felt connected to every person in that space, regardless of shape, age, origin. In that moment I realised that this experience up on this mountain side, at the start of my big adventure, was to be all about vibration, from beginning to end.

In joy as I write these words,
Nathan 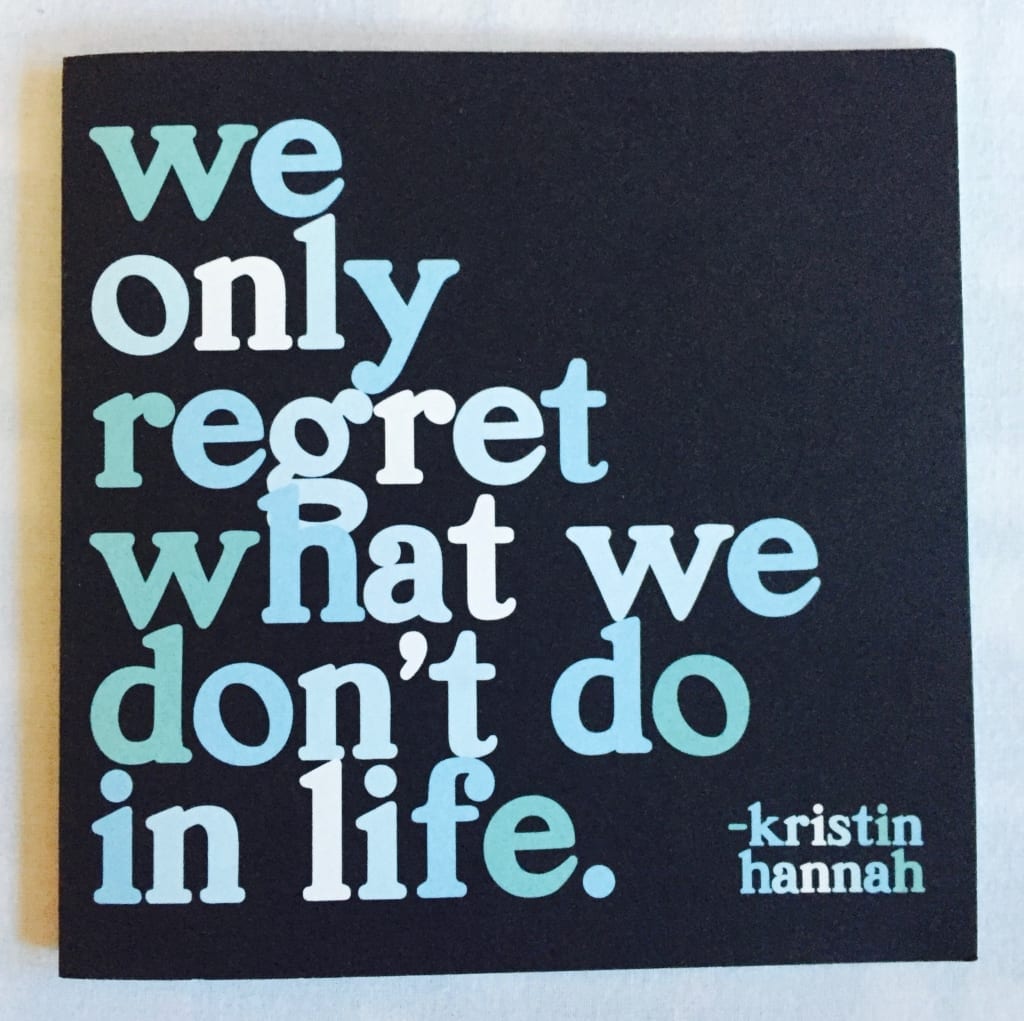 We only regret what we don’t do in life: The endless love and support of my mother. 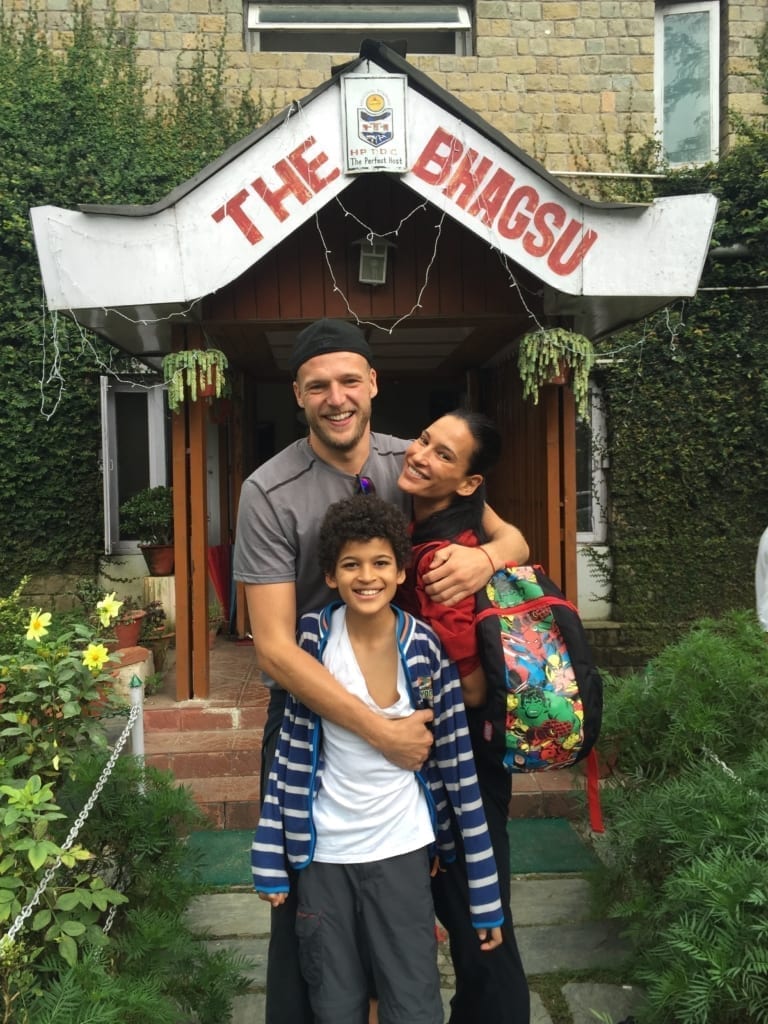 DREAM TEAM saying farewell to each other at The Bhagsu.